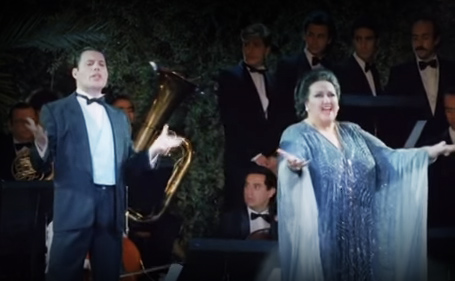 On 22nd February 2016, I will present and perform a new show called “Sopranos! – Arias, Songs and Stories of the Great Operatic Sopranos” in Dublin’s National Concert Hall.

The theme, based on a subject that is close to my heart, emerged during a masterclass I recently gave when a student asked “who is Montserrat Caballé?” I was shocked though somewhat consoled by the fact that the same student had not heard of Freddie Mercury either!

All of the great sopranos had a different style of singing and performing and have contributed directly to the learning, singing styles, techniques and performance of modern opera singers.

Through aria, song and anecdote I want to pay homage to the contribution that those great sopranos have made to opera and music. Their legacy lives strong but their memory is in danger of fading.

The ‘Caballé-Mercury issue’ highlighted a niggling fear I have held in recent years that these women are in danger of being relegated to obscurity rather than being praised and highlighted for the contribution they have made.

Montserrat Caballé and the sopranos of the (very) late 19th century onwards are the only ‘demonstrable’ reference point we have for a heritage that is hundreds of years old as they, unlike their predecessors, have been recorded.

Each of these singers had a different style of singing and performing and have contributed directly to the learning, singing styles, techniques and performance of modern opera singers.

At the height of her singing career Montserrat Caballé was described as having a honeyed quality in her timbre, huge range and fabulous agility that she deployed like a magician in the bel canto operas. It is generally agreed that Caballé set a new standard for the “floated” pianissimo—a sustained soft note in the upper register and an essential to every soprano’s vocal armory. Caballé’s pianissimo has been described as ‘angelic’.

Maria Callas, one of the most renowned and influential opera singers of the 20th century—‘the Bible of opera’—is considered a controversial figure among critics who have described her voice as “instantly recognisable” but “essentially ugly”! A tireless worker, Callas brought a great acting ability to her roles that was comparatively unique and that greatly inspired those that followed.

Apart from having extraordinary careers, many of these women led lives as extraordinary as those of the heroines they portrayed with experiences worthy of any modern-day soap opera!

Leontyne Pryce, one of the first African Americans to become a leading artist at New York’s Metropolitan Opera who, when it was proposed she play Aida, insisted that “when she makes her debut at the Met, she must do it as a lady, not a slave.”

Lily Pons‘ after whom the town of Lilypons, Maryland, USA is named appeared as the face for Lockheed airplanes and Libby’s tomato juice in advertisements and had a beloved pet ocelot she originally believed was a jaguar.

Renata Tebaldi became known as “Miss Sold Out” at the New York Metropolitan Opera due to the popularity of her performances. A rivalry with Callas may have been fictional but it delighted the media and helped in keeping attention on them both.

Swiss-born Lisa Della Casa described as “the most beautiful woman on the operatic stage” and “sexy”.

Irish born Margaret Burke-Sheridan known as ‘Maggie from Mayo’ made her operatic debut in Rome’s Tatro Costanzi before and embarking on a highly successful though short-lived career in many of the great Italian opera houses and London’s Royal Opera House. Puccini was said to have been spellbound by her Madama Butterfly.

Sopranos! – Arias, Songs and Stories of the Great Operatic Sopranos